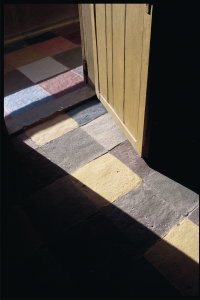 On May 5th 2018, the Maison Ousmane Sow will open in Dakar. It will house the works of the artist, who died on December 1st 2016: the African series, the series dedicated to the great men who marked his life, small Nuba sculptures, original works and unfinished works.

Ousmane Sow called this house, in which he lived until his death, The Sphinx because for him it anticipated the series he was planning to create on the Egyptians. The head, arms and back of the Sphinx are represented symbolically in an architecture that is resolutely modern, which he had designed as a model, as a sculpture, as an individual work of art. 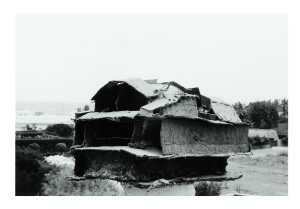 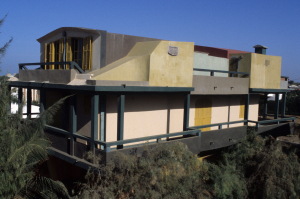 That was in 1991. The house was finished in 1999, the year he completed his Battle of the Little Big Horn. This series consisted of thirty-five pieces that were to be exhibited on the corniche at Dakar before moving to the Pont des Arts, in Paris, to join the African series for a retrospective that attracted three million visitors.

While creating that series, he produced the tiles for his house with his own hands and covered the walls with the same materials used for his sculptures. In other words, there is a perfect match between the works and the place, which could soon join the list of the world’s legendary houses. 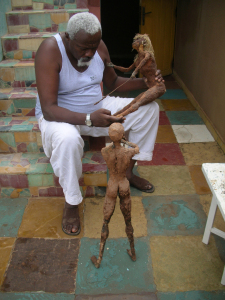 Visitors will move freely through a maze of rooms lined with verandas as they discover the works, memories and the studio just as the artist left it.

According to Ousmane Sow’s wish, in the museum he hoped for, the rooms will bear the names of his father, Moctar Sow, and of his friends: Mustapha Dimé, Boris Dolto, Julien Jouga, Souleymane Keita, Ndary Lo, Iba Mbaye and Gérard Senac. 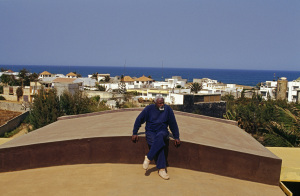 PARTNERS LINKED TO THE STORY OF OUSMANE SOW

The partners who will preside over the birth of this house have a common theme, they are all linked to the story of Ousmane Sow:

- Eiffage, whose office became a second home to the artist, who exhibited his works there from January 1999, the date when the company supported the exhibition on the Dakar corniche as a preview to the one on the Pont des Arts.

- Air France which also contributed to the success of the Pont des Arts exhibition by facilitating a press trip to Dakar for the preview.

- RFI, the artist’s favorite station and one that always followed and supported the work of Ousmane Sow. Through its air waves, it provided him with an international platform.

- The ADAGP, the Society for Creators of Graphic and Plastic Arts, of which Ousmane Sow was a member from his very first exhibitions.

– The CISAC (International Confederation of Authors and Composers) of which he was a highly motivated Vice President and staunch advocate of copyright and, in particular, of resale rights for creative artists.

- The Institut Français, previously the Centre Culturel Français, which housed his first exhibition and, in the Spring of 2017, organized an international homage to the artist.

The CSE (Compagine Sahélienned d’Entreprise), whose Chairman, his friend Aliou Sow, died one year after him and whose respective children are continuing the relationship between the two men.

EXHIBITION: IN THE WORLD OF OUSMANE SOW

Because, over the years, the offices of Eiffage became the second “home” of Ousmane Sow and because an unbreakable bond of friendship existed between its Chairman, Gérard Senac*, and the artist, it is in this magnificent location, with its colonial architecture, that an exhibition will echo the opening of the Maison Ousmane Sow during the Dakar Biennale.

A photo-video installation by Béatrice Soulé (created in July 2007 at Arles, in the Chapelle du Méjean with Actes Sud on the occasion of Rencontres de la photographie) will immerse visitors in the world of Ousmane Sow and take them on a journey relating the various episodes of the bond that tied the artist to the company from 1999 to 2018.

Some fifty photos, embedded in multi-colored tiles, reflect images of the house in gestation and of the artist filmed in the privacy of his studio during the creation of The Battle of the Little Big Horn: a year’s work on eleven horses and twenty-four characters…

Sounds of the ocean and the winds, bird song and the rumble of airplanes, sounds of the studio, percussion and piercing flutes accompany the hallucinatory spectacle of Ousmane Sow in full creative flow.

Two pieces from The Battle of the Little Big Horn series will be shown at the exhibition center: The Fallen Cavalryman and The Wounded Indian.

Next, in dates, words and images, will follow the presentation, as a preview, of the sculpture of General de Gaulle and Man and Child, the discovery of the children’s book Even Ousmane Sow was little, the creation of the trophy named The Marathon Runner for the first Dakar Marathon, an initiative by the company, and the exhibition of the Little Nuba series, his last. 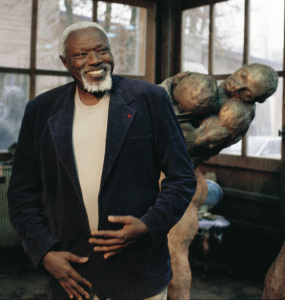 “When the Nuba burst onto the scene in the mid-80s, Ousmane Sow put the soul back into sculpture and Africa into the heart of Europe.”

These words from Emmanuel Daydé, co-curator with Béatrice Soulé of the Ousmane Sow exhibition on the Pont des Arts, say it all.

His career as an artist was actually both short and meteoric. However, the dazzling artistic maturity evidenced in the works that he only agreed to exhibit for the first time at the age of fifty¾the Nuba¾undoubtedly owes much to his past as an anonymous and secret sculptor, who destroyed his every trace. They were immediately acclaimed and today they are emblematic of his work. Shown in 1987 at the Centre Culturel Français in Dakar, the Sitting Nuba and the Standing Nuba were then exhibited in 1992 at the Documenta de Kassel and, in 1995, at the Venice Biennale.

They were followed by his three African series: The Masai, the Zulu and the Fulani.

It was not till ten years later that Ousmane Sow began to create the Little Nuba series, considering that he had not yet completed the 1984 Nuba series and wishing to add more themes.

Mostly, the artist sculpts men in action, thus making struggle the very metaphor and the location of his work.

Determined to represent human kind, he works in series and focusses on the tribes of Africa and then of America. He draws inspiration equally from photography, the cinema, history and ethnology.

In 1999, on the Pont des Arts in Paris, between the Louvre and the Académie, the African series, together with The Battle of the Little Big Horn, a recent creation, stood in all its glory. A major step in the recognition of his work, but also a proud moment for Africa, the country foremost in his mind when he accepted his induction into the Academy.

How could Ousmane Sow have imagined that, fourteen years later, he would be crossing Quai de Conti to make his entrance into the Académie des Beaux-Arts? And he would be the first Black to join that institution, the man who made his first sculptures in the Rebeuss primary school and whose first work was a tiny sailor carved in chalk and displayed on the school cupboard. From that moment, he never stopped sculpting, while, as an adult, practicing his profession as a physiotherapist and, at night or between patients, turning his various offices into a sculptor’s studio. And making animation films there with a hand-cranked Pathé camera using tiny animated sculptures.

Until his death he remained obsessed by animated sculptures and he worked on them with a passion until the end, always focusing on the same face: that of the Mad Emperor.

For his induction into the Académie des Beaux-Arts, fashion designer Azedine Alaïa presented him his own unique costume and Ousmane Sow himself created the sculpture for the pommel of his sword: the leap into the void, as a testimony to the day he decided to end his career as a physiotherapist to devote himself entirely to sculpture.

Previously, he had sculpted the sword pommel for Jean-Christophe Rufin, representing Colombe, the emblematic character of Rouge Brésil, the novel by the author and friend who had been inducted five years earlier.

In the meantime, Ousmane Sow experimented with bronze casting, which become a passion and to which he discovered his own personal note with some highly colorful patinas. And so more than sixty bronzes, both large and small, saw the light of day.

Five large bronzes are displayed in French cities: Besancon, Versailles, Angers, La Rochelle (Victor Hugo, General de Gaulle, Man and Child, Standing Warrior and Toussaint Louverture). Another (The Immigrant) is in Geneva and a new piece will soon be installed in Paris. The majority of these works form part of the series of great men entitled Thanks, which also includes Nelson Mandela and the artist’s own father, Moctar Sow.

Another, older effigy of Toussaint Louverture was acquired by the Museum of African Art at the prestigious Smithsonian Institution in Washington.